“In recent years he has accumulated many pathologies: diabetes, hypertension and severe senile dementia,” a statement from his 11 children said.

Speaking to VOA’s reporter Venuste Nshimiyimana, one of Kabuga’s daughters, Angelique Kabuga said his father’s state of health requires support and constant surveillance, like any weak and dependent elderly person.”

“Leaving our father in prison, in his state, amounts to denying his fundamental human rights, but also denying justice to him and to those who waited for 26 years,”  Angelique Kabuga said.

The 87-year-old Kabuga was Rwanda’s most-wanted fugitive with a $5 million U.S. bounty on his head, until French, British and Belgian intelligence agents tracked him down to his son’s apartment in a northwestern Paris suburb.

Kabuga has been indicted by U.N. prosecutors for genocide and incitement to commit genocide. He is accused of bankrolling and arming ethnic Hutu militias that killed 800,000 Tutsis and moderate Hutus over around 100 days in 1994. He denied the charges this week. 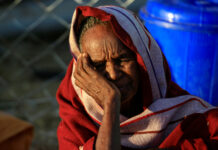