“We don’t have money to import (food grains) so we must produce what we have to eat” Nigerian President Muhammadu Buhari, told farmers after Eid prayers.

It’s a renewed call and nothing new, but the grim reality remains.

The Food and Agriculture Organisation (FAO) has warned that about seven million Nigerians will face food shortage between June and August 2020. The Federal Capital Territory and 16 northern states have been identified to face food and nutrition crisis.

The situation in Nigeria, Africa’s most populous nation, is reflected across sub-Saharan Africa.

Food insecurity is on the rise in Nigeria, particularly in recent times, which presents both a challenge and opportunity for farmers with small holdings and those wish to invest in them.

The president’s vision-‘Buhari Plan’ formulated in 2016 to address the ever-increasing food insecurity in the country has not yielded the desired results. The main goal of the plan of ensuring ‘food for all and eradicating poverty’ has lost its steam over the years.

Over the years, the Nigerian agricultural trade policy has oscillated between liberal and protectionist tendencies.

Even though agriculture still remains the largest sector of the Nigerian economy and employs two-thirds of the entire labour force, the production hurdles have significantly stifled the performance of the sector.

Food crop production increases have not kept pace with population growth, resulting in rising food imports and declining levels of national food self-sufficiency according to the FAO. The main factors undermining production include reliance on rainfed agriculture, small scale landholding and low productivity.

This is mainly due to poor planting material, low fertilizer application and a weak agricultural extension system amongst others.

Primitive agricultural technology couple with high labour intensity is the leading cause for low productivity.

And, a green revolution is inevitable. Nigeria should learn from India’s experience by being one of the largest importers of food grains to being self-sufficient and now a major exporter.

Major suppliers including India, Vietnam and Cambodia have reduced or even banned rice exports to ensure enough availability of food for their own citizens while coping up with the Corona pandemic.

Scarcity of food has driven up prices of the main staple food beyond the reach of the common man.

The World Bank has warned that Sub-Saharan Africa, the world’s largest rice importing region, could be heading from a health crisis straight into a food security crisis.

President Buhari’s appeal is not only a passionate appeal to his farmers but also an SOS call to the international community indirectly.

Cash crops, which earned significant revenue before the oil boom of the 1970s, have experienced low invest. Prioritising the oil sector at the expense of agriculture resulted in leaving Nigeria highly vulnerable to fluctuating oil prices in the world market.

“I wish them (the farmers) best of luck and I hope the rainy season will be bountiful, to get a lot of food”

It’s not just a wakeup call for Nigerian farmers but to all the farmers of Sub-Saharan Africa that are in danger of becoming another Nigeria. 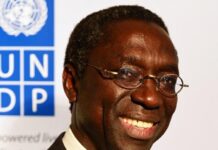