Experts say that the Cameroonian-born prodigy known for his scoring ability could break two records in a few days.

On Saturday, if Youssoufa Moukoko features against Hertha Berlin in the Bundesliga, he will become the youngest person ever to play a professional match in German

Dortmund manager Lucien Favre told reporters: “You don’t know which foot he uses to play. He is a left-footer and a right-footer. He is very efficient.”

Although he started playing in Germany when he was 12 years old, Moukoko has been accused of lying about his age.

He started at Dortmund’s Under-16s at the age of 12 and at the age of 14, he scored six goals in his first match in the Under 19 Bundesliga in a 9–2 win against Wuppertaler SV.

In a game against Inter Milan, the striker scored the 1–0 goal on 23 October 2019, making him the youngest scorer in the Youth League

Youssoufa Moukoko recently dominated a youth game, this time the derby between Dortmund’s and Schalke’s Under-19s.

He has scored 141 times in 88 youth matches for Borussia Dortmund since 2017.

Malawi a country at a crossroad: Together we can bring prosperity to the warm heart of Africa 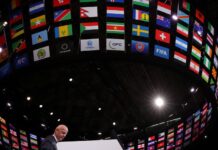 FIFA To Move Its Est-African Office to Rwanda